Trail  Magic – unexpected assistance from strangers through kind actions, gifts or other forms of encouragement.

There are many books I have read about Appalachian Trail thru hikers and how grateful they are for Trail Magic. When I hike the trail in a few years I hope to encounter a few Trail Angels to brighten my day.  Knowing in advance how much I will appreciate that cold drink, hot food or ride to town, Dave and I decided to be Trail Angels for a few hours during our recent vacation in Gatlinburg.

I studied web pages and blogs about Trail Angels and Trail Magic to understand exactly what thru hikers would be glad to see.  Hot food, sweets and fruit seemed to be favorited.  We decided to bring a Western New York delight to the Appalachian Trail – Sahlen’s Hot Dogs along with Weber’s Mustard.  We complimented that with chewy chocolate chip cookies, nutter butters, iced cinnamon buns, bananas and Gatorade.  I also had Purell hand wipes, packets of Advil and hand warmers give out.

We scoped out the parking lot at Newfound Gap, but decided it was much too busy to set up a table and grill.  Dave thought the trail head where I hiked out onto the AT would be much better.  The hikers had to cross right in front of us!  It was a perfect location with a large grassy area and a little flat spot to set up our table and grill.

We arrived at 10:30a.m. and set up our table.  I had made an impromptu  sign – TRAIL MAGIC and hung it on our car.  We sat out some camp chairs and waited for our first hikers.

Dave and I were reading our books and hardly noticed a silent hiker until he was upon us.  He said hello and just as fast he was gone to the other side of the trail!  I was mortified that I had just missed our first thru hiker!!!  He could have had a hot dog!  Ugh!  Well, I vowed that was going to tackle the next hiker to come through!

It didn’t take long before hikers emerged from the woods into the clearing where we were waiting.  I asked them if I could give them some magic and they were all overjoyed.  I didn’t even have to tackle them!  The first hiker was vegetarian!  No hotdog for her!  She gulped down a banana, cinnamon bun and Gatorade, and put a Snicker’s bar in her pack for later.  Her name was Natalie from Austria!  She had been hiking for 14 days.  Which is pretty quick.  Some hikers we met have been on the trail for thirty days. 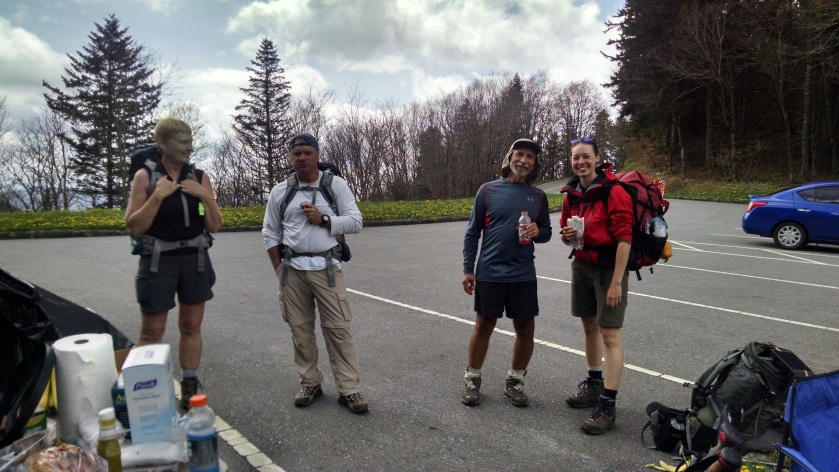 The rest of this first group came from Atlanta, GA; Bakersfield, CA and other places I can’t remember them all.  All the rest had hot dogs and goodies and were thoroughly fed before hiking off.

The next group to come through were a younger bunch.  And they were hungry!  These folks came from Maine, Florida, California, North Carolina and others.  They appreciated the camp chairs to sit in and the Gatorade.  They all had at least two hot dogs and ate a ton of the cookies. 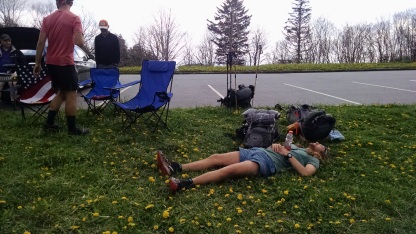 This group stuck around for almost an hour.  I really enjoyed chatting with them, asking them questions, listening to their stories, learning their trail names – Chaco, Mowgli, Ponyboy for example.  There was a brother and sister, and most just met on the way and stuck together.

A few of them had blogs or Facebook pages that they generously gave me to follow them on their journey.  I’m rooting for them all!   It was such a rewarding, relaxing few hours, we decided we would do it again before we left for home.

Our second day of trail magic brought some controversy.  A man working for the Appalachian Trail Conservancy approached us and gave us a talking to about how we weren’t supposed to be set up in the area we were.  We needed a permit.  Uh OH!  We had asked at the Visitor Center about doing Trail Magic and the volunteer said it shouldn’t be a problem.  Well, the Conservancy man couldn’t give us a ticket, but was sure the Ranger would be around soon to kick us out.  We thanked him for this information and started grilling hot dogs.  The Conservancy people were maintaining the trail nearby, so they had their eagle eyes on us, I think hoping we would get a ticket.

Our first thru hikers came through.  I was glad we were there and I think they were too.  There seemed to be a lot of hikers from Florida and we got our first South bound hikers!  They were finishing a flip-flop hike.  They had done Harpers Ferry to Maine and Harpers Ferry to somewhere in North Carolina last year.  This summer they are finishing their hike to Springer Mountain.

Here’s a photo of them heading south!

A group of young men came through and I think I saw the biggest smile ever on person’s face!  The hiker’s name was Gasket and when he bit into that hotdog his smile lit up the world!  We fed Britches, Gasket, Sidewinder, Easy, Ompi and others.

I think I met my favorite thru hiker – Gabriel.  He said he was from Buffalo, so I asked him where in Buffalo.  He said Elma!  Wait? What?  You are from my HOMETOWN?????  Yes, he went to my school and everything.  He grew up around the block from my parent’s home!  What a small world.  He didn’t have a blog or anything, but I gave him my e-mail address.  I hope he stays in touch!

Our fun had to come to an end. The Conservancy man came back and gave us another stern lecture on how we could be possibly ruining the primitive hike of some of the hikers.  The hikers may not want to be stopped during their walk (we didn’t force our hot dogs on anyone), and the trail isn’t “pure” anymore.  Well, that did it for us.  He wasn’t going to leave until we left, so we packed up and made sure the site was pristine before we left.  Leave no trace behind.  I wish we could have stayed all day, but it wasn’t meant to be.

I feel like the Conservancy man made a good and valid point.  He had his view and we have ours.  We did see one person pass our table without stopping, so I don’t think we intruded on anyone’s hike.  They didn’t have to stop if they didn’t want to.

In the meantime, I really hope they don’t try to stop the Trail  Angels anytime soon or in four years!  I’m looking forward to meeting people and enjoying a little small comfort and encouragement when I make it to the trail.

If anyone has an opinion on this, I’d love to hear it!

Adventure driven. Training for my (insert year here) thru-hike of the Appalachian Trail. View all posts by trailchaser2020

One thought on “Trail Magic with a Taste of Buffalo”

New Year's Day!January 1, 2020
This is the year I will begin my thru-hike of the Appalachian Trail.
Follow trailchaser2020 on WordPress.com

New Year's Day!January 1, 2020
This is the year I will begin my thru-hike of the Appalachian Trail.