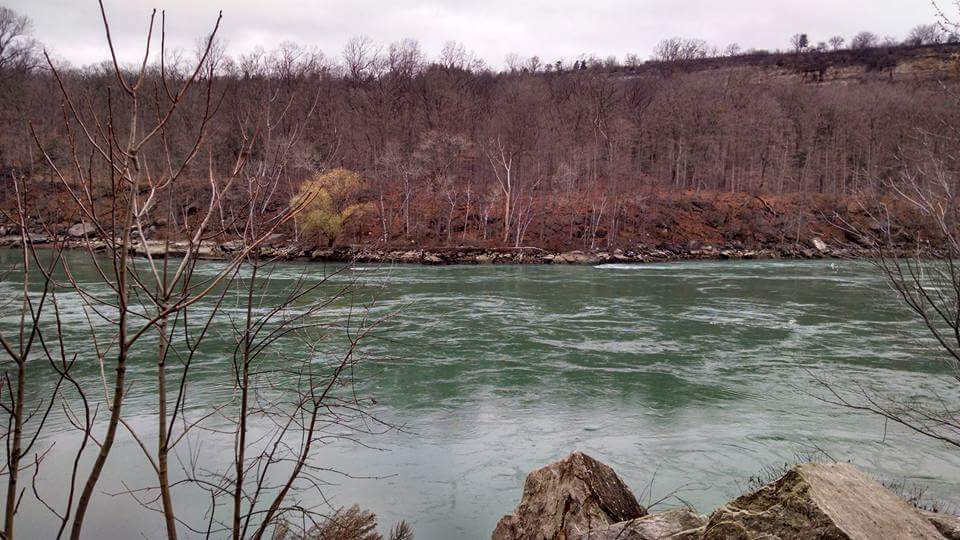 This past weekend I travelled to Niagara Falls, New York to hike in the gorge.  I live about 45 minutes from one of the Seven Forgotten Natural Wonders of the World.  I admit, I found I have taken it for granted, and “forgotten” I lived so close to such a beautiful place.  I hate that I did that.  If you have never been, please do!

Driving into Niagara Falls State Park you can see the mist rising above the Falls from miles away.  I carpooled with Travel Strong (aka Shelley) to the meeting point near Devil’s Hole.  Right away we walked down a few steps and left the trail to find a cave.  Rumor has it those entering the cave are cursed!  Needless to say, I did not go in the cave.  But here is a picture!

We all made our way further down, down, down to the bottom of the gorge.  Approaching the Niagara River I could see the rushing water and felt my heart beat faster!

There were brave fishermen on the rocks.

The path was narrow in places and very rocky.  Shelley informed me that the Appalachian Trail in Vermont was very rocky.  I joked with her that I would skip Vermont!  It was actually fun scrambling over the boulders, but I felt like I was moving in slow motion.  The other hikers in our group seemed so agile and energetic and I felt like a Weeble wobble. Weebles wobble, but they don’t fall down!  Shelley didn’t know what a Weeble wobble was…here is a picture.

I played with these as a kid, now you know I’m old.

The gorge has some very unique rock formations.  I learned that the trail we were hiking used to be a trolley track!  If you don’t believe me, here are two pictures. 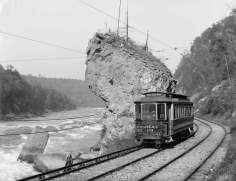 Same rock, just 80 or 90 years later!  Crazy!!!  It is so neat seeing something like this.  They shut the trolley down because the constant rock slides tearing out the track became to costly to keep up.  I’m glad or I would not be able to hike here today!

After carefully making my way over the boulders we came to an area called “the flats.”  Obviously, a flat rock area that provided a spectacular viewing area of the river and gorge.  We lingered here for 15 minutes, I think the hike leader knew I had to catch my breath!

There were so many stunning pictures!

We continued to through to the Whirlpool Trail to the very end of the trail.  Or so it is supposed to be the end of the trail – our fearless leader led many of our fearless hikers onto the “forbidden trail!”  I chose to stay behind with a group of others.  I know my limits!  This isn’t really a trail at all and brought you extremely close to the rushing rapids on very slippery rocks.  Not for the faint of heart! 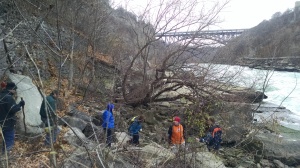 Of course, Shelley the daredevil, who can’t have a hike where she doesn’t have a near death experience, walked right in the river!  I am glad I didn’t see this when it happened (photo courtesy of another hiker) or I would have had a heart attack!

Our group all reassembled in one piece thank goodness and turned around the way we came, but this time we headed up the high trail, away from “the flats” and boulders on a less rocky path.  We came to the bottom of the stairs of the Whirlpool Trail.  There is approximately 300-310 stairs, depends who is counting.  The picture I took shows the gradual incline of the first few stairs.  Then the stairs become more like a ladder.  Okay, I’m exaggerating, but the incline is much steeper.  I did not get a picture of the nasty part of the stairs, because I was trying to breathe.

I let all the others go a head of me, but Ali (a former correction’s officer) and Shelley stayed with me, making sure that I had their support all the way up!  Ali was like a happy Drill Sargent!  She gave me small goals to achieve along every step of those stairs.

Shelly always is my motivator!  She cheers me on and even at one point pushed me from behind – It helped!

As I approached the final flight of stairs, our fearless leader called out to me and was cheering me on and encouraging me up the last steps!  I couldn’t dream of a better group of people to hike with!

After catching my breath at the top of the stairs, there was more to hike!!  We made our way on the trail above the gorge back to our cars.  Spectacular views from above!

I slowly and easily made my way to the parking lot and caught up with the group.  I then discovered – I WASN’T LAST!  There was a small group behind me!  It amazed me that I wasn’t the only one they were all waiting for! 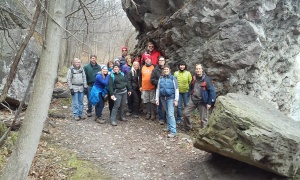 The gang at the Trolley Rock.

Adventure driven. Training for my 2020-21 thru-hike of the Appalachian Trail. View all posts by trailchaser2020

New Year's Day!January 1, 2020
This is the year I will begin my thru-hike of the Appalachian Trail.
Follow trailchaser2020 on WordPress.com

New Year's Day!January 1, 2020
This is the year I will begin my thru-hike of the Appalachian Trail.